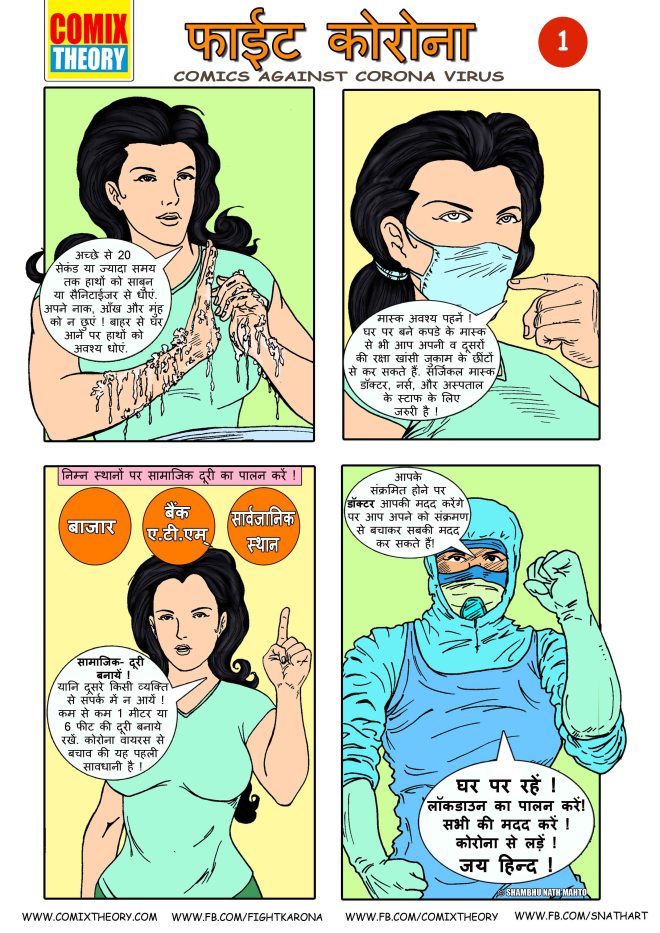 Translate This Page in Your Language 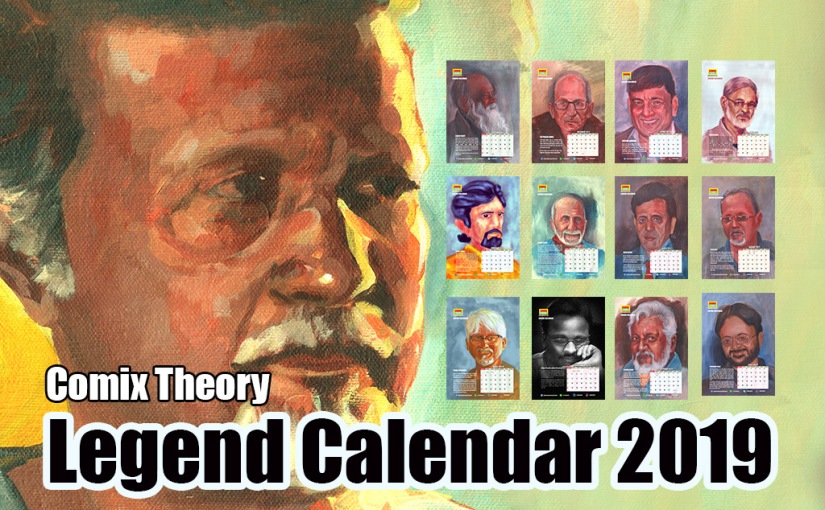 We all know that India has a great history of popular print culture specially comics & novels and children books which has vibrated through the creativity of many creative in past century. The idea behind this ‘Legend’ calendar is to make an argument ‘culturally’ by framing the importance and history of popular print culture through highlighting and presenting the lifetime contributions of some of the great writers and artists India has in past century. As a tribute one of the founding fathers of Indian comics industry and popular print culture is feature on the cover of this Legend Calendar –  Late. Shree Pratap Mulick, who is well known among the readers, collectors and art connoisseurs.

COMIX THEORY is not just an publishing venture but it’s a cultural venture, Legend Calendar is part of the larger cultural framework in which we are working . As a part of this cultural venture we are also bringing a series of books titled  “Encyclopedia of Indian Comics, Novels, Comics Fans, Collectors and Popular Print Culture”.

With this Legend Calendar we tried to experiment with the creation of a shared collective memory through executing the idea of Legend Calendar in every possible way which makes it an shared experience, launching a ‘Crowd Funding’ from 5 jan to 21 jan, 2019 was a part of that execution. Soon we are going to make presentations and workshops in Schools, Colleges and Fine Art Institutes to put this Legend Calendar and history of Indian popular print culture and creatives, readers and collectors into the cultural space.

Born on 1 July 1936, Pratap Mulick was a painter and celebrity comics artist for more than 5 decades until 2007 when he died on 18 June, leaving behind his treasured legacy for the upcoming generations. He was most loved for working on comics characters Supremo (film star Amitabh Bachchan as comics character Supremo) and Nagraj. His works in Amar Chitra Katha and in other comics are celebrated to this day by the art connoisseurs. He had his own studio in pune, Maharashtra and has many artists in his art direction working in comics.

Born on 5 May 1935 in Rajula (Saurashtra) Gujarat, British India, Aabid Surti. He is G.D. Arts from J.J. College of Arts, Mumbai. He is known as painter, author, cartoonist, and playwright . As a painter he has held 16 exhibitions in India and abroad. He is highly acclaimed for innovative technique in art called MIRROR COLLAGE.

Films division (Govt. of India) made a short film called ABID on his creative work as painter. He is a winner of PRESIDENT AWARD for short-story collection Teesri Aankh (1993), winner of UP Govt.’s Hindi Sahitya Sansthan Award for literature. He has written 80 books. He has written for telefilms & serials for DD, radio & zee TV, 3 film-scripts for Naqab, Solah Strah, Aaj Ka Masiha And Radhe Radhe Hum Sab Aadhe (Play). In 1983 he was appointed as Special Executive Magistrate.

The first cartoon character he created were in 1952-53 for a Gujarat magazine Ramakadu. He created character BAHADUR in 1978 which was published by Indrajal Comics, which achieved a large fan following since then. His other notable creations are Inspector Azad, Inspector Vikram, a lady character Shuja.

Born on 10 August 1947, in Allahabad, UP, India. Ivar Utial  is the reverse name of his real birth name Ravi Laitu. He had abandoned his Engineering filed to venture into the fascinating world of creative writing and painting. With missionary zeal he produced creative works and books introducing children to the world of science and math. For his books he got  overwhelming 60000 letters as fan mail of children from all over the country. Out of his 71 books some notable books are 101 Magic Tricks, 101 Science Games, 101 Science Experiments, Manoranjak Ganit.

As an artist in batik medium he did a solo show in 1977 at Triveni Gallery, New Delhi.

In 1986 he joined Manoj Comics and created some 18 characters which made a mark on the popular comics culture like Col. Karn, Sagar-Salim, Amar-Akbar and the cult classic HAWALDAR BAHADUR.

Born on 5 April 1964, Vivek Kaushik is an Artist, Writer and Astrologer. He did his B.F.A in Sculpture from College of Arts, Delhi. His first illustration was published in Sacchi Duniya magazine. In 1984 his two sculptures are selected for National art exhibition– AIFEX. He has works published in Comic Books, Educational Books, Newspaper  as illustrations, articles, stories and books. He has 77 books to his credit apart from numerous comic books.

He is famously known for the comic characters Shaktiputra, Radha the Judo Queen and Bauna Jasoos from Radha Comics and Vega from King Comics.

He worked as freelance illustrator & designer for many Ad-Agencies and started his own Ad-designing Studio. He has illustrated more than 60 comic books published by India Book House, Raj Comics and others. After 1996 he become full time painter and received many awards since then. He has an abiding interest in Hindustani classical music and himself is a sitar-vadak from past 25 years.

Born in 10 October 1968, Mohan Sharma is an artist who is working in the Indian comics industry since 90’s. He is known for illustrating famous characters like Suryaputra, Liza, Hunter-Sharks, Shaktiman and Chhammak- Chhallo.  He is still working as an illustrator for many publishing houses.

Sukhwant Kalsi, born on 14 July 1958 is a cartoonist and writer famously known for Moorkhistan & Junior James Bond. He started as a freelance cartoonist in 1972 and his works appeared in all leading magazines of India, e.g., Dharmyuga, Caravan, Women’s Era, illst. Weekly, Sarita, Diwana etc. In 1980 he worked in comics like Diamond Comics, Chitra Bharati, Manoj etc. with 75 full length published comics, and more than 10000 cartoons to his credit.

Currently he is in Film and TV industry working as writer, and to his credits are Comedy Night With Kapil, Movers & Shakers, Made in India, The Great Indian Laughter Challenge (for Raju Srivastava), Comedy Circus, Radio Big FM and many more. He is editor of popular children’s magazine Nanhe Samrat from past 31 years.

Born on 15 august 1967 in Palamau, India. Neerad started his career as cartoonist from the age of 10 in 1976 and in 2007 awarded National Award from the Dept. of Science & Tech. Govt. of India.  Associated from last 40 years with comics and cartoon strips he has worked with all newspapers and magazines of national level, Diamond comics, Raj comics. He has 200 solo comics published from Diamond comics.

He is in regular association with UNICEF for MEENA, also he has worked with many INGO’s & NGO and Govt. departments. He is currently an IEC Designer in World Bank, Patna.

Jagdish Bharti was born on 4 august 1949 in Ayodhya, India. He has a born sense of humor charged with his spiritual inquiries making his antics and humor popular since 1967 in popular culture, starting with magazine ‘Junglee’, Diwana, Lotpot, Bagdam and finally Madhumuskan as his worldly resort to spiritual expression through his antics. In late 90’s due to increasing level of violence and gore in comics content he quit and found his passion in working with Osho Foundation.

Currently he is working in the film industry as storywriter and filmmaker.

Born on 2 October 1952 in Mumbai, Maharashtra. Grownup in Manmad district Nasik, Husain Zamin is an artist and writer. Now living in Noida, UP since 1980 he is continuously working from last 40 years in comics, children books, ad-agencies as illustrator and storyboard artist.

He is famously known for his work on Madhumuskan character Babloo. He has created a character Advocate Vasant Sahni in Chori Ka Arop published by Comix Theory in 2018.

He was born on Nov 6th 1960 in Mathili, Odisha. He did a diploma in Art at Santhanu’s Chitra Vidhyalayam, Chennai. First work published in “Bala Chandrika” in 1982. In 1986 he started working for comics with legend Pratap Mulick and worked together for 8 years.

Ved Prakash Kamboj,  Born on 1 December 1939, in Delhi, India. He is a living legend of popular pulp fiction. With his first novel ‘Kangoora’ in 1958 he never turned back and he had 400 novels, 200 stories and other books to his credit.